Rugby earned his third leg and companion dog title today. He was pretty darn good. He did give me a forged sit one time and he went wide on one of the about turns. For his front he was too far away and off to my left. :/

Outside of his actuall ring time, he did have a harder time focusing on my when other dogs were around. He was much more bold today and was trying to say hi to everyone. He was also jumping out of his skin with not being worked or able to play yesterday. He was almost too hyper so we spend some extra time warming up. You could still see the energy in the ring when we did the fast pace change and the recall. :p

He won the class and was high in trial! Not our best performance but it was pretty darn good I would say. 🙂

Rugby also met the smallest dog either of us have ever seen. It was a 2 year old chihuahua and weighed a whopping 1 lb 14 oz. Rugby looked like a monster next to her. She was wayy tiny. 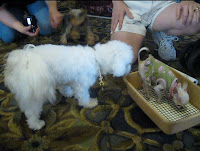 Back to the Beach

I headed back to the beach this weekend, this time with Rugby in tow. He…