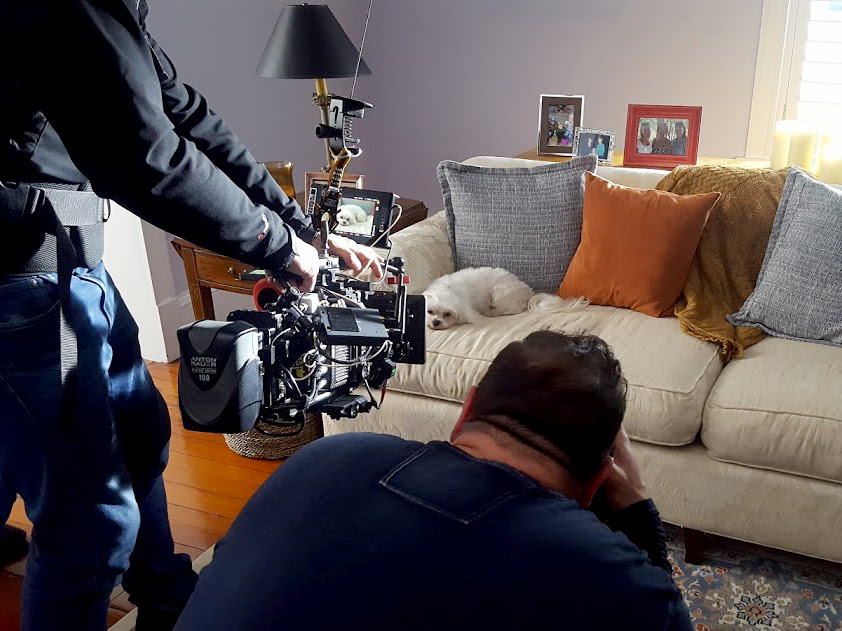 Last fall, one of our friends shared a casting call with us from Pawsitively Famous Animal Acting for a friendly, food motivate Maltese. Rugby is both of those things, and since stardom is on his bucket list, I sent some photos (and videos) over to Dawn to see if he would be a good fit for the part. 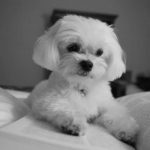 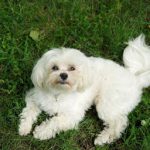 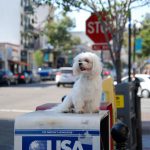 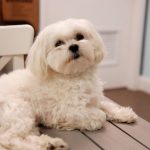 Once he was officially picked and approved, we had to tackle the biggest obstacle of Rugby’s short acting career. Rugby was blue. If you’ve just met Rugby recently and can’t image what he looks like when he is blue… feast your eyes on this. or this. or this. 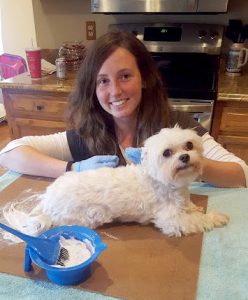 And so began our quest to de-blue Rugby. Lucky for us, we rent our training space from some great dog groomers, and I have a couple of cosmetologists in my family. They all pointed me in the right direction, and soon we had a white dog again.

A couple weeks later, with Rugby looking like your average Maltese, we were headed up to Philly for his shoot. We were met shortly after our arrival by Bill, from American Humane. It was his job to keep an eye on Rugby so he could issue the infamous “No Animals were Harmed” certificate. Since we had to do a LOT of waiting, we spent a lot of time with Bill. He had lots of great stories to tell of past shoots, and was very helpful as we navigated the shoot. He let us know how sets usually work, what to expect, when to be where, when to stay out of the way, etc.

During Rugby’s first scene, he was supposed to be laying on the bed while the actress came in from shopping and unpacked her bags. She says a quick hello to him before doing that. The bedroom was very crowded with cameras, and people essential to the shoot, so I had to wait down the hall while this happened. No big deal for Rugby, I gave him a down stay on the bed and he stayed put through several takes of the scene. I was able to pop my head in, in between takes to make sure he hadn’t moved and let him know he was doing alright. I did have to re-set him one time during that process. The out of sight stays came is SUPER handy for this scene! 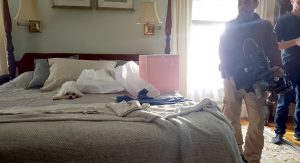 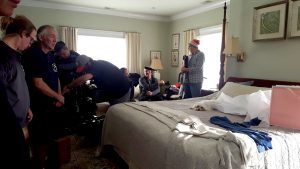 The second scene Rugby did was of him greeting the actress as she came down the steps, got her keys and walked out of the house. I used his “go say hello” command for this exercises and we armed the actress with some treats. I couldn’t get a good photo of him in action for this scene since again, he had to be around the corner from me after I sent him to do his task.

The third scene was of Rugby walking up to the actress while she was reading on the couch. She greets him, gets on the floor, takes a toy out of the basket and plays a quick game of fetch with him. This was another use of our “go say hello” command. While Rugby does have a nice solid play retrieve, his formal retrieve training came in handy here too so that he would fetch even for a near-stranger.

The last scene included the actress leashing Rugby up and taking him out the door for a walk.

This wasn’t really a scene, just filler. Rugby sat next to the actress while she read a magazine on the couch, and then had his own couch time. Rugby was literally bred for this job. We did get to use his “chin” command, where he puts his head down for his personal couch time. 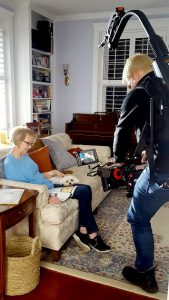 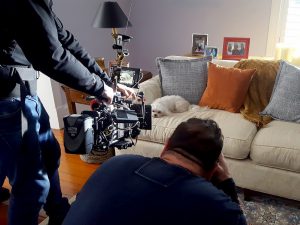 The whole shoot was a testimonial for the drug, Prolia. The actress/patient, Carole, has a Maltese named Gracie in real life that Rugby was portraying. You can check out the final product on their website, here.

There are two videos posted. For your convenience, I’ve listed below all the times Rugby makes an appearance.

“See Why Twice a Year Was Right For Carole”

“Found Our Why Carole Pressed Her Doctor”

I really enjoyed seeing how easy and effortless the tasks were for a dog that has been trained. Although Rugby has had more training than your average dog, most of the tasks required of him for this shoot we teach in our Puppy Programs (down, stay, go say hello). We aren’t lying when we say that trained dogs have more fun. Training was certainly the reason Rugby was allowed to play the part of a movie star for a day. He loved every minute of it!

Now that all the fun is over, we just need to decide if and when Rugby will be blue again. Hmm…

In December, I posted about my goals for this upcoming year. It included both a…

It is important for even the tiniest of breeds to embrace their inner dog. While…

All the dogs came to class on Thursday in costume. We still did a little…