We just can’t seem to let go of the go-outs and move on completely to directed jumping. I think they may drive me insane. Until we get to that point though, we will just keep practicing and dreaming of perfectly straight go-outs.

We snuck away into the other room before Thursday Night class the other day and used the only things we could find as “props” for our go-outs. I started off with just one chair, that Rugby had to run under. I varied where the chair was, to encourage him to keep going straight for the whole time (not just for the first 20ft). 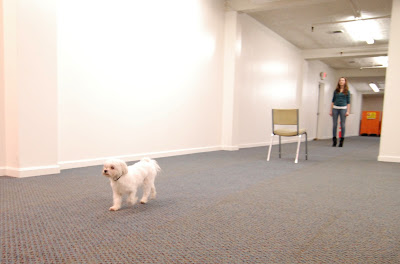 He actually enjoyed going under the chair, so I added a few more. The next two he had to run in between instead of under. Eventually we ended up with this set up. It took a couple tries to get the hang of it but it finally clicked. 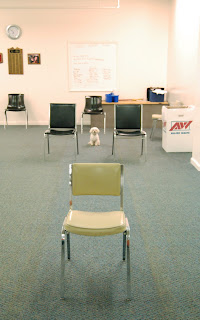 I felt we exhausted this set up, so I went to the only other thing left in the room – an agility tunnel! I knew I didn’t want to have to climb in the tunnel after Rugby so I did the first two by setting our targets at the other end. It wasn’t a problem at all! 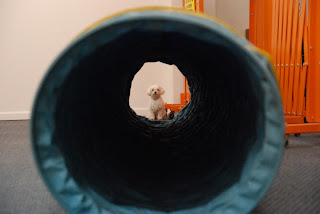 Since we were on a roll with the go-outs, it seemed appropriate that we would continue with them today. We have practiced this way before, but this was the first time we were actually any good at it. We used our broad jump boards spaced about 3ft apart and standing on end. They made different ‘paths’ for me to direct Rugby through. Phew, this was hard! The video is us working about 20ft from the boards. We went a little further today but needs some more practice before we can do this at full distance.
The thing I was throwing after he sat was his target/retrieve stick. He LOVES it, except it is apparently hard to find in the grass! Diesel, the shepherd, was also off to the side. He is to blame for the whining and for the interruption to remind him to keep ‘placing.’ Sighhhhhh…