skip to Main Content
Free Evaluation Enroll Today Client Portal 443-386-6011
We went to two matches this weekend. I have tried three times to get the videos uploaded, but Photobucket hates me, apparently.
The Saturday match is one that we have been to before and Rugby did just fine. Heeling was a little sloppy, and he stopped half way back on the directed retrieve to readjust the glove, but still qualifying. I was happy with it. There wasn’t time to do a run in Open before running back to Applewoods to teach the current Elementary Class.
Today the match was someplace new. We signed up for Utility and Open. We went in Open first and besides a couple crooked fronts, I have no complaints with it. He held both stays.
Utility – he blew it. I can’t figure out what it was that threw him off so much. Was it the new location? Was it the fact that this is the first weekend we did two Utility matches in a row? Just that he wants to worry me because we are in the ring next week?
The Sunday Utility break down :
Signals were good. He has decided that fast = RUN now. I can keep up with him but it is an unexpected change!
He wasn’t sure about Scent Articles today. He picked up the correct metal article, checked all the other ones, then went back to the right one and brought it back. He did the same thing on the leather except when he rechecked the pile, he decided a different article was the right one and tried bringing it back instead. On the second try for the leather, he went straight to the right one and brought it back without checking the rest of the pile.
Directed Retrieve = AMAZING. No readjusting, straight front, straight finish. MUCH improved from the mess he was during Thursday Night class. The late night glove exercises in the parking lot have paid off!
Moving stand, was good… uneventful.
Directed Jumping = disaster. I ‘marked’ him the first time and he locked onto the corner of the glove he just went for, glove number three. I ‘marked’ him a second time and he almost anticipated the “sevens” command and he sort of jumped forward. The third time I marked him, he ran straight out then veered into the right corner. Ughhhh!
I stopped him before he got too far off course, but too close to the jumps to take either of them. I tossed a target out in the middle and sent him for it. We tried the directed jumping over again, this time he gave me a straight-ER, but not straight go-out and then went to the wrong jump. I repositioned him at the center of the ring and he refused both jumps and just made his way back to me. Huh?! I gave him a collar correction, walked him over to the bar jump and gave the command again.
Next time I put a target out, and did a straight retrieve to the center of the ring.
Then we restarted the directed jumping exercise one more time and he nailed it. He was SO embarrassed, he could hardly contain himself when he finally did it right. The fronts and finishes were terrible because he could barely stop wiggling enough to sit down. 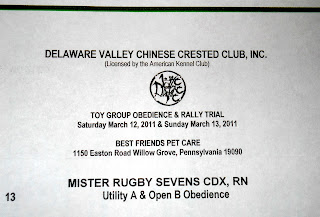 Good news is, we are definitely entered for our debut in Utility. After today, I am REALLY worried about next weekend. Maybe we aren’t ready after all.
I have all sorts of ideas about how to train this week to get the most out of the 5 short days we have left, but we need to check in with the Boss first.

Don't ask me how I skrewed up my countdown again. I am just not good…

So, Rugby went to class, and he did pretty well except that he forgot how…

Rugby is farm sitting this week with me. He isn't allowed to meet any of…